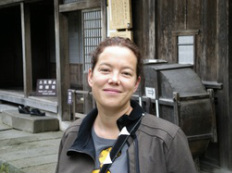 I have a background in Linguistics, then trained as a Conversation Analyst for my PhD.

For many years, I worked mostly within the area of grammar and interaction, exploring among other things how speakers of Danish accomplish a variety of social actions through utilizing the grammatical resources available. In addition, I did some work on professional practice in the context of elderly and their home helps.

In 2008 I joined the Sønderborg Participatory Innovation Research Centre and started exploring design and innovation processes from an interactional angle, investigating, for instance, how participants in such processes negotiate their design. From this developed a natural interest in the material – design and innovation processes are frequently build around objects of various kinds and though talk plays an important role in the negotiation between participants, this negotiation is also clearly tied to the properties of the objects that are used and how the participants makes sense of these objects.

I have since started explored the material aspect of interaction in more detail and will continue to do so in the “Social objects for innovation and learning” project.
Currently, I am for instance editing a book on the sociality of objects with Maurice Nevile, Pentti Haddington and Mirka Rauniomaa. Mirka and I have co-authored a chapter in this book where we compare two different objects that both produce sound: the vacuum cleaner and the car radio. In the chapter we show how participants in interaction orient to the fact that these objects produce sound and hence negotiate when in an interaction they can be turned on. We will look at how participants in interaction negotiate to then subsequently turn these objects off in a later paper. With my PhD student, Eleni Mourtou, I have just completed a paper on how objects can be used to scaffold communication with people with communication disorders and am now working on a paper on how an object such as the design game may scaffold consensus in museum exhibition development (with Mai Murmann and Amy Seakins). Other ongoing projects include the investigation of repeated gestures in a collaborative design activity (with Kristian Mortensen) and an exploration of how the affordance of post-it notes is exploited by participants in workshops (with Agnese Caglio and Jeanette Landgrebe).

Aside from my current interest in objects, I continue to explore the more general interface between grammar and interaction. With Jakob Steensig, I am currently finishing a chapter on responses to remote requests, after which we will begin to explore the Danish turn-initial particle “altså” and its interactional function. We are also involved in a project with some members of the Finnish Centre of Excellence in Intersubjectivity in Interaction on recruitments that are made in the imperative form and with people from DanTIN (Danish grammar of talk in interaction) on other-initiated repair in Danish. Finally, I am working with Marja Etelämäki and Anna Vantanen on the disaffiliative uses of syntactic recompletions in Danish, Estonian and Finnish. You can read more on these ongoing projects on my personal website.